Day in the Life with an Almost 3 Year Old

It's been a few months - oops! Right after the last update, we learned we were expecting! First trimester tiredness made me more keen to nap during naptimes than blog, and we were pretty dull those months (both food-wise and activity wise). Luckily I'm now 16 weeks along and feeling much more like myself! Unfortunately I've been suffering some hip pain and am seeing a chiropractor, so have been trying to not walk TOO much and have been getting several lap swim sessions in each week at Gold's which is helping. My first trimester was filled with carbs, chicken, ceaser salad and apple juice. But the last few weeks, burgers have reigned king (I may or may not be on a first-name basis with the P. Terry's team by the chiropractor - yikes). 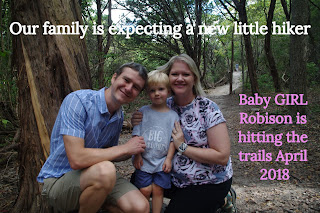 Other fun this fall included celebrating our 6th wedding anniversary. We also enjoyed a trip to Houston for our friend Shanna's wedding and fun with my family. Our friend Christine and her daughter Aurelia came to visit from Japan and stopped in Austin for a day - so great to catch up! And Luke's parents were kind enough to take Emmett to San Antonio for a day and took him to the zoo while Luke and I went to Wurstfest with our friends in New Braunfels and had lots of fun. We then headed to SA to stay the night and have some more family fun. 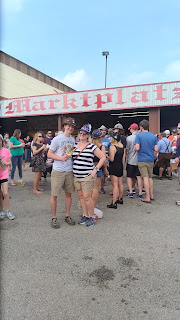 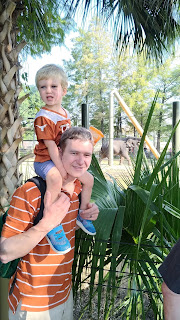 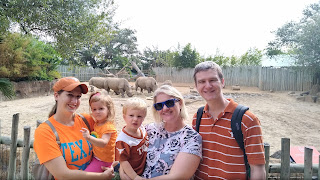 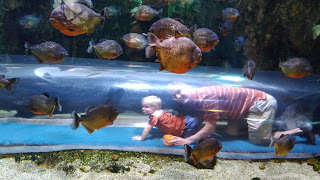 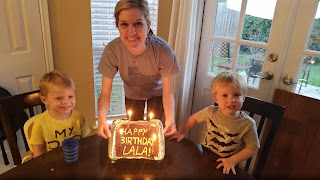 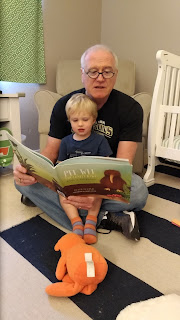 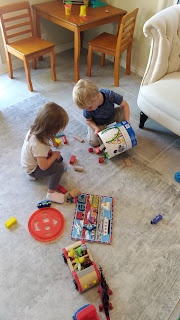 And of course, we enjoyed Halloween! Luke and I had a sitter one night to go to a party and had fun dressed up as a pregnant housewife and the milkman. For trick-or-treating, Emmett was Daniel Tiger (surprise surprise). He enjoyed trick-or-treating at our neighbors' houses and had no problem knocking on the door and saying trick-or-treat! We also went to a trunk-or-treat at his school's church but couldn't convince him to wear his costume. He and Luke already had flannel on, so we made a 5 minute family lumberjack costume - ha! 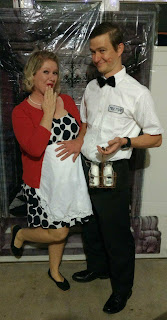 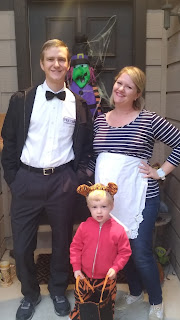 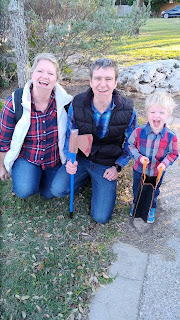 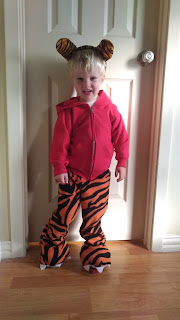 E's favorite phrases:
He loves to sing and does it all the time. Mostly Daniel Tiger songs, songs he learns at school, or familiar song melodies with his own made-up words (which is something I always do and am kind of tickled pink that he does it too).

And here's a day in the life!

7:10 a.m. We hear footsteps and Emmett appears on Luke's side of the bed saying "my clock is green!" followed shortly by "I'm hungry." Ha! Luke pops out of bed, thankful to get to sleep past 7 and they head downstairs. I take a couple extra minutes to wake myself up and follow them. The OK to Wake clock has been awesome and I would say it works maybe 1/2 of the time (especially on mornings I can hear him fidgeting around in his bed waiting for the clock to turn green at 7.

7:30 a.m. We sit down to a breakfast of mixed cereals, pomegranate arils and pecans. I LOVE pomegranate season and enjoy it over Quaker Oat Squares - which is quite a change since I've not been feeling cereal this pregnancy. Emmett discovered he LOVES pomegranates and enjoys munching on them one-by-one and in his Greek yogurt and Cheerios. We easily polish off a whole pomegranate worth of arils. 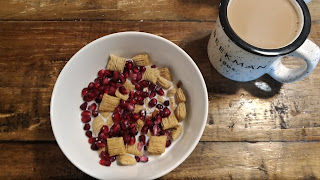 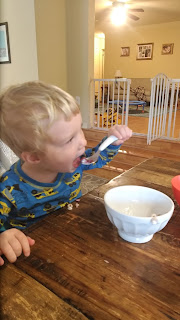 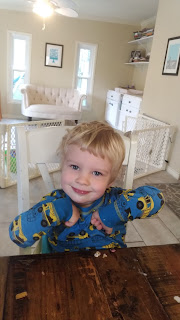 8:00 a.m. Luke heads upstairs to shower and change for the day and Emmett goes to his play area for a bit while I tidy up from breakfast. I'm in the midst of getting him changed when Luke needs to leave for work, so for once we don't go to the front yard to wave goodbye to him. It's actually kind of nice because then I get a chance to tackle a few more morning routine chores instead of monitoring E in the front yard.

8:30 a.m. I spot the neighborhood guineas in our backyard! Such a treat, since they haven't been there since right after we moved in (due to Benji no doubt). E and I get excited and try to head back there without Benji noticing, but no luck. He jets past us and scares them up on to the fence/trees, but we have fun playing in the back on the swing set and sand box. E is happy so I run inside to get dressed. 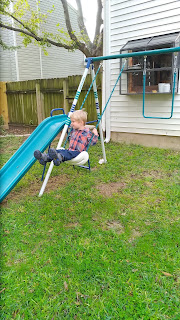 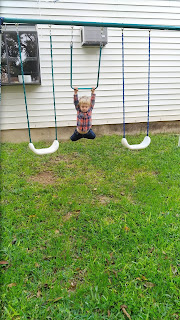 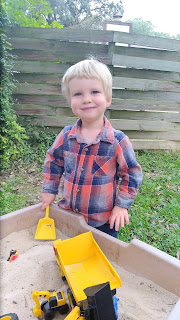 9:15 a.m. We head out on a balance bike walk in the neighborhood. We had a playdate scheduled for 10, but my friend let me know she was running late so instead of a one-block walk we go for about a mile. He is SO fast on his bike now - he usually gets about 4 houses ahead of me and then has to wait for me to catch up! We cover just over a mile which is great since we're doing the Hike It Baby 30 challenge and we could use a few more miles! 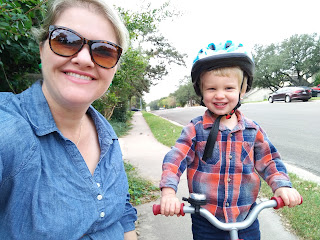 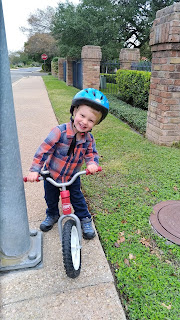 10:05 a.m. We get home and quickly throw snacks in a backpack and head to Catch Air. E snacks on some animal crackers in the car and I snag a few. It's SO GOOD to see my friend Rachel and her daughter Amity - they're just 3 weeks apart and have been pals since they were tiny babies. Rachel's family has been living in Utah this fall so it's been a while since we've seen them. The kids have fun playing and we get to catch up a bit. It turns out to be Catch Air's 2 year anniversary so they have a clown doing balloon animals and free donuts (yum! E and I split one). He doesn't know what to make of the balloon animals and kind of just wants a regular balloon. He won't tell her what he wants so she gives him a little doggie that he loves (Amity gets a huge octopus which is SO cool and all the kids are obsessed with it). They also each get a regular balloon that E won't let he hold or tie down, and of course it flies away within 2 minutes and he loses it. *sigh* 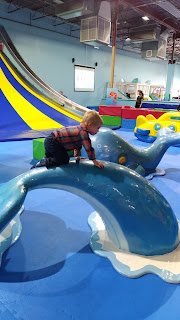 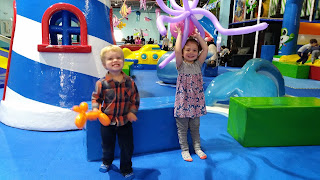 12:20 p.m. We head towards Phil's Icehouse to continue the playdate fun with burgers (a corndog for E!) and a great outdoor playground. 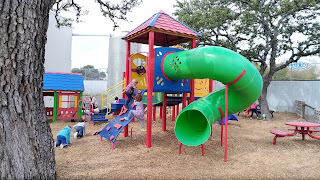 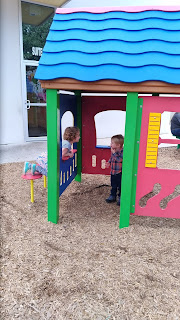 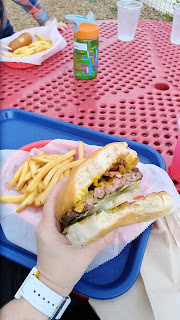 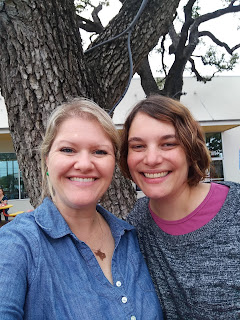 1:30 p.m. It's time to say goodbye and head home for naptime. I let E watch Daniel Tiger in the car to make sure he stays awake.

1:45 p.m. We do a quick naptime routine of milk and 3 (short) books, brush teeth and potty. Then he sprints to his room and jumps on his lamb rug, gets piled up with blankets and says bye.

2:10 p.m. I'm exhausted from our morning of fun but decide against a nap so as not to mess with my sleep tonight. I lay down on the couch and turn on Victoria season one and work on this post. Lucky I don't have any pressing chores to tackle today, because I don't get anything else done... oops!

4:30 p.m. After getting packed up and ready, we hop in the car to head to In.gredients for a Hike It Baby happy hour! He munches on dried okra on the way.

5:00 p.m. It's fun to catch up with friends and play on the new play structure they have! Eventually I go inside to order and get us two stuffed pretzels - one margharita style and the other fig and chevre. He pretty much only eats the plain pretzel part, so I'm glad he at least had a healthy snack! Can't win 'em all. 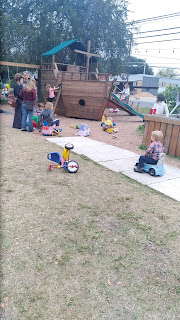 7:20 p.m. Back home and so happy to see daddy! We usually see him for lunch and/or dinner, so this was a rare day. We happily play upstairs (hide and seek is a favorite, as well as running around like crazy with Luke).

7:40 p.m. We finally get E in the bathtub a bit late. Luke and I are enjoying catching up on the day and let him play with his tub toys a bit long, and he's mad to have to stop playing to get scrubbed up.

7:55 p.m. I go lay in bed so Luke can carry him in all wrapped up in his hooded towel to snuggle with mommy - a new tradition born from my super tired first trimester days when I'd mouthbreathe while they did tubby time. We get him in jammies and read a couple books in bed, then it's off to brush teeth and go potty. One more book in his bed! 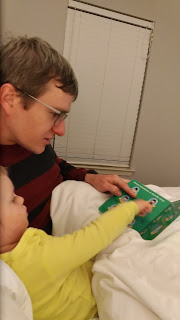 8:20 p.m. A late-ish bedtime for E, but that's alright. Luke and I hang out in the kitchen cleaning up dishes from breakfast (oops!) and making grilled cheese and apple slices for his dinner (and my second dinner - no judging!). We curl up on the couch to catch a couple episodes of season two of The Good Place (how good is that show?! We love it). 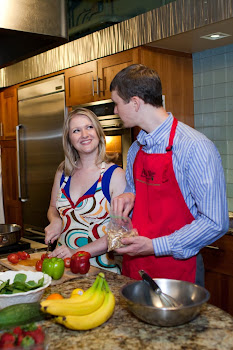